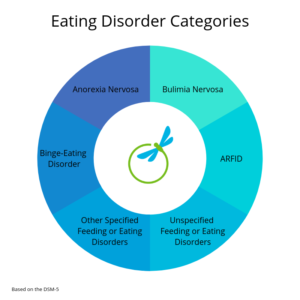 Anorexia Nervosa is a mental illness characterized by distorted body image, fear of gaining weight, and restricting food and/or compulsively exercising to lower body weight.  This illness effects both men and women.  It also has one of the highest mortality rates.  In a 2011 article published in the Archives of General Psychiatry, at least 1 in 5 anorexia deaths is by suicide.  Early intervention is key to successful treatment.

Restricting type: During the last 3 months, the individual has not engaged in recurrent episodes of binge eating or purging behavior (i.e., self-induced vomiting or the misuse of laxatives, diuretics, or enemas).  This subtype describes presentations in which weight loss is accomplished primarily through dieting, fasting, and/or excessive exercise.

Binge-eating/purging type: During the last 3 months, the individual has engaged in recurrent episodes of binge eating or purging behavior (i.e., self-induced vomiting or the misuse of laxatives, diuretics, or enemas).

Bulimia Nervosa is an eating disorder characterized by constant preoccupation with weight and body image, resulting in behaviors such as binging and purging, laxative use, excessive exercise, and other means to control caloric intake.  Sufferers may be able to maintain their weight for years without anyone around them knowing about their condition.  Some of the symptoms of the disorder are:

People suffering from Binge Eating Disorder experience recurrent episodes of binging on large quantities of food, followed by unhealthy behaviors to compensate for the binging.  During the binge, sufferers experience a loss of control, feeling shame and guilt for the binge episode.  People who have this disorder may be of normal weight, but are often overweight or obese. Binge Eating Disorder may result in serious health consequences, including high blood pressure, high cholesterol, diabetes, joint issues, and other conditions.   Symptoms are:

You may have a friend or family member that has a reputation for being a picky eater, but it may be more than just personal preference. Recently added to the DSM-V, ARFID, or Avoidant/Restrictive Food Intake Disorder, is atypical eating or feeding which results in malnutrition, weight loss, and/or emotional distress.

ARFID does impact children and may be more prevalent in individuals diagnosed with autism spectrum disorders. Adults are also impacted by this disorder, too. ARFID may look different for everyone. Some individuals may avoid certain food groups altogether, while others may have a fear of a particular food, or may even be scared of swallowing, choking, nausea, or vomiting.

According to the DSM-5, symptoms of ARFID include:

Other Specified Feeding or Eating Disorders

The disorders listed below do not fully meet the criteria of the disorders listed above, but still impact how an individual functions on a daily basis.  The DSM-5 lists the following as Other Specified Feeding or Eating Disorders:

Disordered Eating is descriptive of erratic or varied eating patterns that may not be defined by an eating disorder diagnosis.  Despite this, the behaviors can be disruptive to a healthful and balanced relationship with food, often consuming significant time and attention.

Given the complex nature of an eating disorder, treatment requires a unified approach from a multi-disciplinary team of professionals. Our entire treatment staff is equipped to deal with not only eating disorders but also with the behaviors, disorders and conditions that often co-exist, including addiction, mood and anxiety disorders, PTSD, trauma, and personality disorders. Our team has specialized training in each of these fields so as to ensure each client the highest level of care. We also have access to a network of Board Certified Psychiatrists and Internal Medicine Specialists who can manage any medical issues if necessary.

Treatment for Eating Disorders at the Oasis is intensive psychotherapy. We are not just focused on symptom management because we believe that if the issues underlying an eating disorder are not fully resolved, relapse is imminent. As such, each client works intensively with an individual therapist in order to explore core beliefs, environmental influences, and emotional drives at the root of the eating disorder. At the Oasis we recognize the complexities of an eating disorder, and understand that treatment is lengthy in nature. We are equipped to address your needs on a long-term basis even after completion of our intensive eating disorder program.